When can you expect to retire? A new study reveals the average age of retirement by 2050!

As life expectancy continues to rise across the world, naturally, the age of retirement tends to follow.

Research reveals that Koreans are expected to be the oldest workers in 2050, with the effective retirement age of the population being nearly 81.84, nearly 82 years of age.

New Zealanders will be the second oldest members of the OECD when they retire, at the tender age of 80 years old. The retirement age for people living and working in New Zealand is predicted to increase by 10 years across the 25 years between 2025 and 2050.

The top 10 countries predicted to retire the oldest by 2050 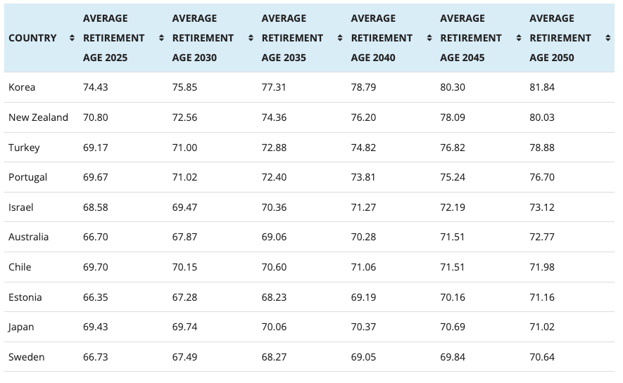 Interestingly, predictions show that people living in Greece are excepted to retire at just 57; one of the few countries where the retirement age actually decreases. Predictions show they will be retiring near the age of 60 in 2025 and this will have reduced to just over 57 in 2050, making Greece a desirable place to work.

Poland and France come in second and third when it comes to the lowest predicted average retirement age in 2050 at 61.49 and 61.78 respectively. Individuals living in countries including Spain, Ireland, and Mexico can all expect to enjoy retirement before hitting the age of 65 in 2050.

The top 10 countries predicted to retire the youngest by 2050

When can the Brits expect to retire?

With reports saying that the state pension is set to rise to 68, it is no surprise that predictions are saying that by 2050 that'll be the average age of retirement for British citizens. For Brits retiring at 68, that means working 11 years longer than the Greeks, and 9 years longer than the Polish and French. This puts the UK within the top 20 countries that are predicted to retire the oldest, ranking 18th. Hungary, Netherlands, Canada, the United States, Finland, Latvia, and Germany rank above the UK as they're predicted to retire 1-2 years older.

The top 20 countries predicted to retire the oldest by 2050

To find the full research and to also see the predicted life expectancy for each country, please visit: https://ourlifeplan.co.uk/rising-age-of-retirement/