“Financial markets seem convinced that the US Federal Reserve is poised to cut interest rates, even though unemployment stands at a 50-year low, wage growth is 3.1%, inflation is near target at 1.8%, the Conference Board’s consumer confidence indicator is hovering near 18-year highs and the S&P index is within 2% of last May’s all-time peak,” says Russ Mould, AJ Bell Investment Director. “On the face of it, such action is not really merited, given the headline economic data, so investors need to be asking themselves what the Fed is seeing that they are not, especially as the last two-rate cutting cycles from the American central bank initially brought holders of US equities absolutely no joy at all.

“According to the CME Fedwatch service, financial markets think that there is a 21% chance of a rate cut from the Federal Reserve on Wednesday. 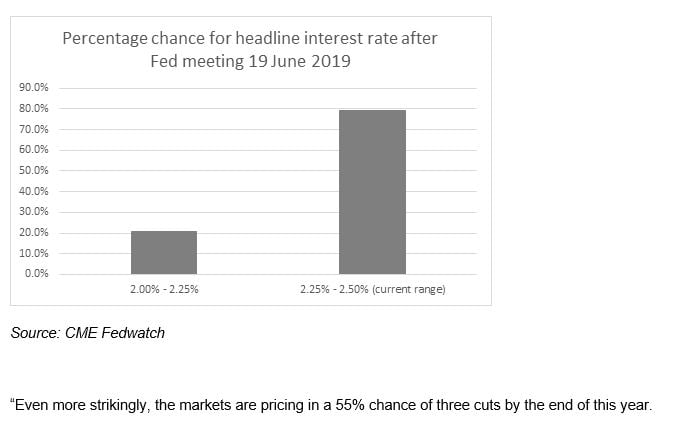 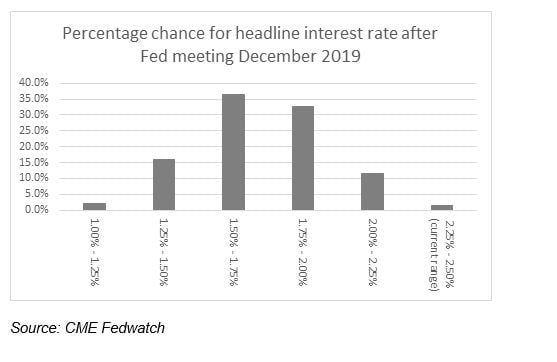 “This is a huge change from December when the US Federal Reserve was talking about two to three interest rate hikes for 2019, to add to the run of nine one-quarter-point hikes that it had put together since December 2015.

“This policy U-turn, which will also see the Fed stop withdrawing its Quantitative Easing scheme at the rate of $50 billion a month come the autumn, looks to be one contributory factor to the strong run in US (and global) equity) markets this year.

“This is partly because lower interest rates on cash, and lower yields on bonds, make those asset classes look less attractive to investors relative to equities. But it also reflects investors’ faith in the fabled ‘Fed put,’ and the central bank’s presumed ability to support both the US economy and stock market alike.

“This dates back to when then-chair Alan Greenspan waded in with a pair of quick-fire interest rate cuts and a $3.6 billion bail-out plan in the wake of Russian debt default and the collapse Long-Term Capital Management hedge fund in 1998. That set the scene for another leg-up in the 1990s US equity bull run and – in the eyes of some – stoked the technology, media and telecoms bubble that finally burst in 2000.

“The mantra among equity investors therefore became ‘Don’t Fight the Fed,’ but the historic performance data suggest that buying stocks on the first rate cut is not the guaranteed source of profits that this slogan would have you believe.

“In fact, the data over eight rate-cutting cycles since 1970 from the USA make for grim reading for those investors who blindly buy American equities on the first Fed rate cut of a cycle,

“This is because they have lost money on average over the past eight rate-cutting cycles on a three-, six- and 12-month view, with the last two being particularly painful, when ‘fighting the Fed’ was actually the right thing to do.

“The US economy – and therefore corporate earnings – were tanking when those first rate cuts came through in 2000 and 2007 and that combination meant that the prevailing valuations applied to US stocks were unsustainable.

“No-one seems to be expecting a downturn in US GDP or American corporate earnings power now. But they weren’t expecting either factor in 2000 or 2007 either so investors will need to ponder what lies behind any interest rate reductions that we do see this year.

“If the Fed’s publicly-stated concerns over tariffs and trade mean that chair Jay Powell and colleagues are right to fear a US slowdown – and by extension a hit to company profits – then the S&P 500’s inability to make any major progress for nearly 18 months when everything is supposedly going well could be a harbinger of trouble should things suddenly start to go unexpectedly badly.”