Global profits soared to a record £2.3 trillion in 2018[1], up 7.2% year-on-year. And they are set to rise even higher this year, according to new research from Henderson International Income Trust plc (HINT), an investment trust targeting high and rising dividends as well as capital appreciation from companies listed outside the UK. Worldwide, three-fifths of companies and two thirds of sectors grew their profits in 2018, and the majority of companies and sectors posted record results.

Dividends are rising even faster than profits, up 9.2% to just over £1.0 trillion last year, comfortably a new record. This year dividends will rise again, up 8.7% to £1.1 trillion, outstripping profit growth of 5.6%. Seven tenths of companies and four fifths of sectors all reached new dividend records last year.

Between 2010 and 2019 global profits have grown at an average annual rate of 6.5%, far slower than the 10.3% annualised increase in dividends. This dividend growth reflects a number of factors, including the normalisation post the stresses of the crisis, balance sheet rehabilitation, lower debt costs and investor appetite for income. The result is a sharp decline in dividend cover, a key measure of dividend sustainability. In 2010, when dividend cover reached its post-crisis peak, profits were 3.0x the value of dividends. In 2018, profits were 2.3x dividends. The same trend is apparent in median[2] dividend cover, a more representative measure that means big companies do not distort the picture. Median dividend cover peaked at 2.7x in 2010, and fell to 2.3x by 2018. It will drop to 2.2x this year, its lowest level in at least a decade. Median cover is lower in every region than it was five years ago (and compared to 2010), and in every industry group. Moreover, 70% of the world’s top 1,200 companies now have lower dividend cover than they did five years ago. 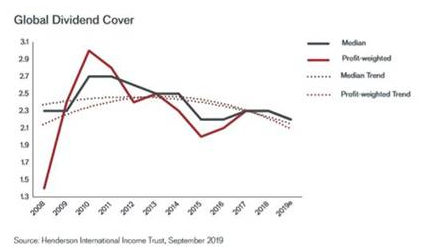 Geographical variation in dividend cover reflects both the local dividend culture, and the mix of sectors. Among the largest fifteen stock markets in the world, Australia consistently has the lowest median dividend cover every year and was just 1.4x in 2018. Favourable tax treatment and a stock market dominated by very large, mature banks with limited growth opportunities, explain why such a large portion of profits is distributed. With dividend cover of 1.6x, the UK is the third lowest. The deeply entrenched dividend culture in the UK combines with a sector mix that is dominated by large oil and pharmaceutical companies, as well as banks and utilities, all mature, high-payout sectors.

At the other end of the scale sits South Korea. Dividend cover of 4x in 2018 was almost double the global median. China and Japan also maintain high cover, at 3.4x and 3.1x respectively. In all three countries, this has come down over the years as dividend-paying becomes part of the investment culture.

Cover varies widely from sector to sector too. Each sector has its own dynamic across the economic cycle, is at a different level of maturity or is encountering disruptive forces. As a result, dividend cover varies accordingly. 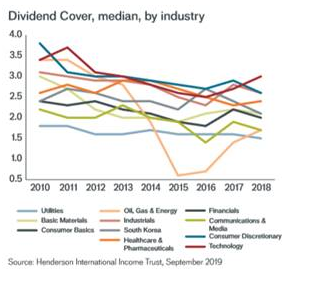 Technology companies hardly paid any dividends ten years ago, though their profitability was rising fast; their dividends are now catching up. The result is declining dividend cover from a very high base, though even now it’s still well above the average. Dividend cover has contracted for the telecoms sector too, but in this case because profits have been falling even as dividends have continued to rise, heralding payout cuts to come.

Sectors with steady, stable earnings can sustain dividends at much lower cover levels than those whose profits are more sensitive to the economic cycle. This is why tobacco and utilities maintain such low dividend cover, at 1.3x and 1.5x respectively in 2018. By contrast, oil companies and banks have high dividend cover in the good times, and low cover in bad times.

Ben Lofthouse, Fund Manager of Henderson International Income Trust said: “If a company’s profits are growing over the long term, then its dividends can grow sustainably too – meaning not just income for investors but capital gains too. Dividend yields are very attractive compared to prevailing interest rates, but investors need to tread carefully. Our research shows that dividends from approximately one fifth of the world’s companies as featured in the Janus Henderson Global Dividend Index are potentially unsustainable, especially if the global economy weakens. At potential turning points like this, an active approach to fund management is a great way of avoiding the potential dividend traps and focusing on those companies best able to provide stable, sustainable income over the long term.

“Typically, dividend cover rises quickly as an economy turns upwards. A long economic expansion is then associated with a steady decline in cover ratios as companies loosen the purse strings. And finally, an economic contraction causes sudden drops in dividend cover, before the process begins again.

“We are not concerned about falling dividend cover because it was unnecessarily high in the past in some sectors and some parts of the world. Our analysis does indicate, however, that some countries and sectors are healthier than others.

“By taking an international approach to investing, income is better covered by profits, and better diversified across different industrial sectors, and between economies at different stages in the economic cycle and in their development.”