BEST VALUE FOR FAMILIES: THE 17 UK TOWNS AND CITIES WHERE YOU CAN BUY A FAMILY HOUSE FOR £100,000 OR LESS

4th June 2019 -- It is still possible to buy a family home, with three bedrooms or more, in or close to a major UK town or city, for less than £100,000, according to research by online estate agents Housesimple.

Analysis of the residential property market reveals that 17 major towns and cities currently have more than 200 family houses for sale at £100,000 or less, a figure that is approximately three times the average UK salary*.

Liverpool has 628 houses for sale, with three bedrooms or more, listed at £100,000 or under. All these properties are within a five-mile radius of the city centre. There are 449 family homes in and around Rotherham for sale for £100,000 or less.

The top 10 best value towns and cities for families are located in three regions; the north west, north east and Yorkshire.

Not surprisingly, there isn’t a single town or city in the south of England that features in the Top 40 best value locations for families. Exeter offers best value in the south, but there are still just 23 homes on the market at £100,000 or below, within five miles of the city centre.

There are 18 towns and cities that currently have no family houses for sale for £100,000 or less, within a five mile radius of the centre; of these, 17 are in the south (including London, Bath, Brighton, Bristol and Cambridge) and the other is Aberdeen in Scotland.

The following table shows UK towns and cities offering best value housing for families, based on the number of properties currently for sale at  £100,000 or less: 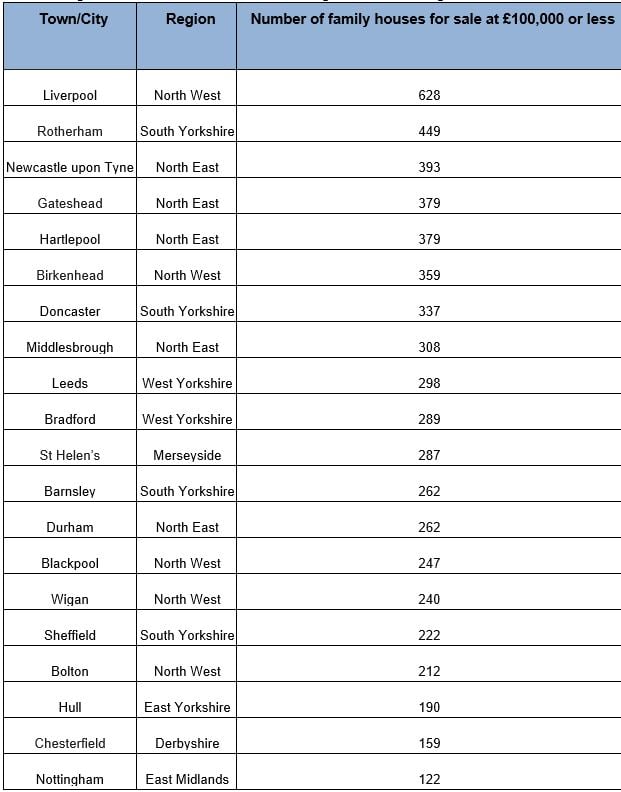 Sam Mitchell, CEO of Housesimple, comments: “Even with the challenges and uncertainty surrounding Brexit, we are seeing healthy levels of interest from buyers in northern regions, keen to take advantage of attractively priced properties, affordable mortgage rates and stable local economies.

“Buying the family home is the biggest purchase most of us will ever make. The struggles families have faced buying a house in the south have been well documented. Compared to the south, there is substantial value to be found in property markets in regions such as the north west and Yorkshire.

“Although £100,000 is at the lower end of the market, there are also plenty of substantial family houses at prices around £300,000 to £400,000, that would probably be £1m plus in and around London, and unaffordable to the majority of families there.”