-       Domino effect sees suppliers hit as small businesses struggle to pay their own invoices, with £50 billion owed in unpaid bills[2]

The findings highlight the scale of the late payments challenge facing British small businesses, who are owed an average of £23,360 in overdue invoices on any one day and have to wait on average 14 days after the due date to be paid.

Xero’s Small Business Insights showed that the amount owed to small businesses in late payments on any given day in February 2019, was up 17 percent from the year before, demonstrating the startling growth in tardy payment practices.

The impact of late payments has a damaging domino effect across the UK economy: on average in any given month, 48 percent of invoices issued by small businesses are paid late, and as a result a quarter (26 percent) of small business owners struggle to pay their own suppliers on time.

In December 2018, the average UK SME owed its suppliers £8,811 in overdue bills, equivalent to £50 billion of debt across the small business economy.

As well as the impact on a business’s financials, late payments also negatively impact small business owners’ lives outside work. Over the last 12 months, over half (52 percent) have used personal savings or borrowed from friends and family to keep their business alive, while a quarter (26 percent) said they would enjoy better physical health if late payments were no longer an issue.

In contrast, the research suggests that getting paid on time can have a dramatic effect on a small business owner’s happiness and ambitions. Over three quarters (76 percent) of small business owners agree that having a business feels more ‘worth it’ when there aren’t cash flow problems, and a quarter (27 percent) felt they would be in a better position to grow their businesses should late payments no longer be an issue – boosting both the small business ecosystem and broader UK economy.

Gary Turner, co-founder and managing director, Xero, said: “Late payments don’t just damage business finances and relationships; they can compromise personal finances and relationships. Our research illustrates how getting paid on time can have a dramatic effect on a small business owner’s happiness. When they struggle, the whole of the UK struggles. While we welcome the Small Business Commissioner’s ‘traffic light’ warning system for the worst offenders of late payments, more action needs to be taken.”

Nicola Longfield, Director of Small and Medium Business, PayPal UK, said: “For small businesses looking to grow, time and money are paramount. Late payments sap both and prevent a business owner from investing in the technology, staff or stock needed to sustain and grow their business. That’s why we have been working closely with Xero to try and find solutions to help businesses get paid faster.”

Xero has teamed up with PayPal to help make it easier for customers to pay invoices. By adding PayPal as a payment option to an invoice, customers can get paid up to 21 days faster using their PayPal account or credit card. 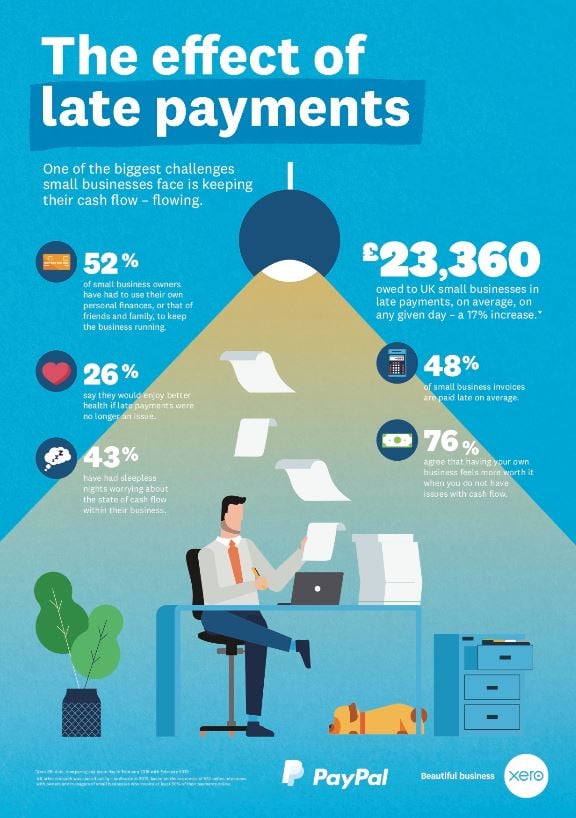 To find out more about how late payments are affecting small businesses read the full report here.