Adrian Lowcock, Head of Personal Investing, Willis Owen says:
“Markets got off to a strong start in 2019 as investors regrouped amid a shift from the US Fed to
back away from further interest rate rises. The resolution to the US shutdown and hopes that the
US and China could reach some agreement on trade also helped lift equities. The bull market was
once again led by the US and, within that, technology stocks were once again key, having been the
main driver in recent years.

“However, it has not been plain sailing, with the majority of the returns seen in the first few months
of the year before hopes of a US-Chinese Trade deal were dashed by a Trump tweet, and before
global economic date weakened.

“The top ten performing funds in the first half are usually characterised by one sector or asset class
dominating the lists, and as one might expect US and technology funds were dominant, but over
the first six months of 2019 there are a number of interesting themes. Pictet Russia leads the pack
as the country continues to make up ground from extremely low valuations, rebounding from the
sell off last year. LF Ruffer Gold is a standout feature given the defensive nature of gold, but this
reflects the rally in the gold price very recently and the subsequent move up in gold miners which
we have seen in the second quarter of the year in particular. 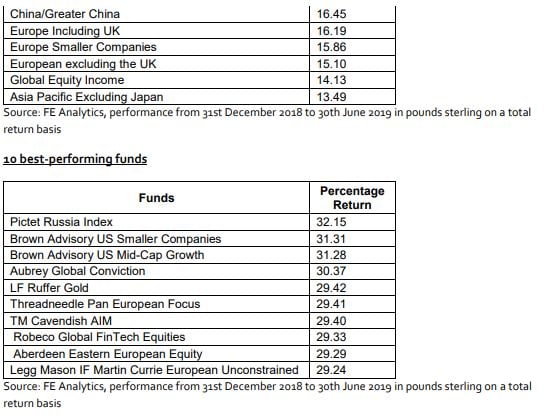 “At a fund level, the worst-performing ten funds were dominated by targeted absolute return funds,
although there are three equity funds, including two managed by the fallen star Neil Woodford,
which make the list. The Omnis Income and Growth fund has now removed Woodford as manager,
and the fund lagged the suspended LF Woodford Equity Income fund. The delay in Brexit is unlikely
to help Woodford turn his performance around and the suspension of his flagship fund is likely to
have been a distraction which could impact performance for the rest of the year.” 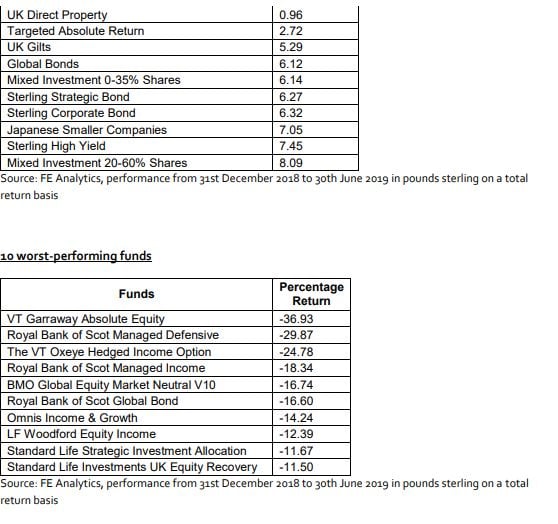