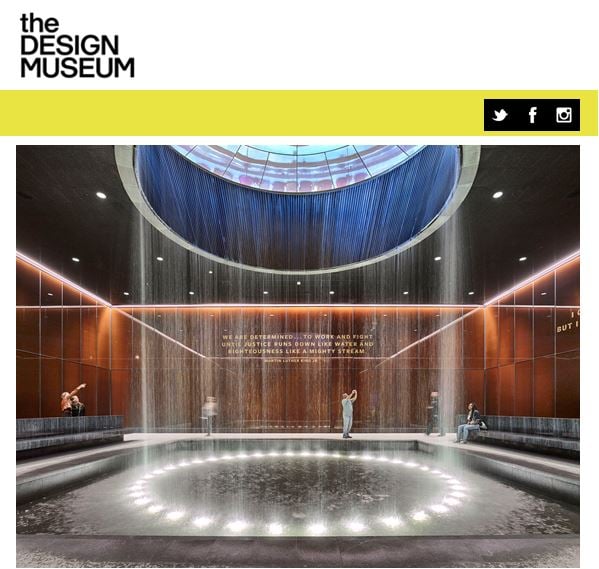 The Design Museum presents a new exhibition that explores the role of monuments and memorials in the 21st century, through seven projects by celebrated British-Ghanaian architect, Sir David Adjaye OBE.

The exhibition features projects such as the Smithsonian National Museum of African American History and Culture in Washington D.C, the new National Cathedral of Ghana in Accra and the UK Holocaust Memorial and Learning Centre* in London.

Highlights include a full-scale section of the Sclera Pavilion for London Design Festival 2008, a replica library area from the Gwangju River Reading Room in South Korea, as well as inspiration materials including a sculpture by the early 20th-century Yoruba artist Olowe of Ise.

In this exhibition, celebrated architect Sir David Adjaye OBE will examine the idea of the monument and present his thinking on how architecture and form are used as storytelling devices. Monuments are a record of who we are and are deeply ingrained in our psyche as a way of memorialising ourtriumphs and failures. However, the form that monuments take, and the way they are experienced, is constantly changing.

This exhibition shows that contemporary monuments are no longer static objects in a field – plaques, statues or neo-classical sculptures – but are dynamic and complex spaces that serve a wider purpose.

The exhibition opens with a visual survey of monuments and memorials starting with the Acropolis of Athens (447 BC) and continues through many places, cultures and ideas until the 2018 Millicent Fawcett statue by Gillian Wearing in London, UK.

Each of the seven projects, selected by Sir David Adjaye, is presented in a dedicated room alongside specially commissioned video interviews and immersive site-specific displays. For example, the Youruba sculpture that inspired the form of the Smithsonian National Museum of African American History and Culture is displayed at the centre of the room to demonstrate how Adjaye’s design process uses aspects of anthropology, history and sociology to investigate form and purpose. The room dedicated to the National Cathedral of Ghana will be populated with traditional Asante umbrellas. The form of the Cathedral’s ‘canopy like’ roof is influenced by these Ghanaian umbrellas, the Baoman ceremonial canopy, and traditional tabernacle shelters – combining motifs from Christianity with Kingship and Western African tribal traditions.

Three further ongoing projects feature in the exhibition. This is the first opportunity to see an in-depth display of the proposed Coretta Scott King and Martin Luther King Jr. Memorial in Boston, designed to be a place for discursive action and assembly. Another room includes a dedicated space for the proposed UK Holocaust Memorial and Learning Centre designed in collaboration with Ron Arad Architects as Memorial Architect and Gustafson Porter + Bowman as Landscape Architect. Visitors will also have a chance to explore MEMO - the Mass Extinction Memorial Observatory designed with Sebastian Brooke and proposed for a coastal site in Dorset.

Sir David Adjaye OBE said:
“Making Memory is set up as a provocation or a question to the public. I am not scared of a narrative that unfolds and splinters. I find that is much more representational of the collective consciousness that we all live in today. I really hope the exhibition is a vehicle for dialogue and discussion about what constitutes a monument and a memorial at the beginning of the 21st century.”

“The monument is no longer a representation, it is an experience of time and place that is available to everyone. Whether it’s for a nation, a race, a community, or a person, it is really used as a device to talk about the many things facing people across the planet. Democratisation does not mean that monuments cease to be relevant; it requires the monument to be transformed, so that it has an inbuilt openness and can be approached and understood from many points of view.”

Over the past few decades Sir David Adjaye has emerged as one of the leading architects of his generation. Born in Tanzania to Ghanaian parents, Adjaye’s influences range from contemporary art and music to science and African art forms. After moving to the UK, Adjaye studied architecture at the London South Bank University and the Royal College of Art before setting up his first office in 1994, later reformed as Adjaye Associates in 2000. The firm now has offices in London, New York and Accra and is working on projects across the globe.

As part of its programme, the Design Museum invites designers to think in public about a theme of their choice. Previous collaborations include Breathing Colour by Hella Jongerius and 100 Mile City by Peter Barber.

Projects featured in the exhibition include:

Gwangju River Reading Room
The River Reading Room was a collaboration between Adjaye and the writer Taiye Selasi. Adjaye was invited to design a structure that responded to Gwangju’s ten-day pro-democracy uprising in May 1980, which ended in the massacre of hundreds of students and citizens. Consisting primarily of concrete and timber, the pavilion houses a library of 200 books about histories of social justice and protest, curated by Selasi. The space acts as a public reading room, encouraging the city’s inhabitants to exchange books and ideas related to freedom, democracy, equality and human rights. In the exhibition visitors will be able to sit among a replica library and read some of the books selected for the original Gwangju pavilion.

Smithsonian National Museum of African American History and Culture
The museum was inaugurated by President Obama in September 2016 on the last available plot at the National Mall in Washington D.C. and was a long-awaited symbol of the African American contribution to the nation’s history and identity. Adjaye’s approach created a meaningful relationship to this unique site as well as a strong conceptual resonance with America’s longstanding African heritage.

The building comprises a three-tiered structure covered in bronze coloured panels. Designed to shade the glazed facade, the filigree cladding is patterned to reference the history of African American craftsmanship. In 2017, the building won the Design Museum’s Beazley Designs of the Year award.

UK Holocaust Memorial and Learning Centre
Located next to the Palace of Westminster in London’s Victoria Tower Gardens, the UK Holocaust Memorial and Learning Centre will be the first significant building in the UK dedicated to the Holocaust and its lasting impact. The design is proposed by a team led by Adjaye Associates, with Ron Arad Architects as Memorial Architect, and Gustafson Porter + Bowman as Landscape Architect. The proposal is set out to create “a living place, not just a monument to something of the past” and an immersive journey for the visitor who would enter a memorial embedded in the landscape of Victoria Tower Gardens. More than 70 years after World War II, the UK Holocaust Memorial and Learning Centre will be a space to reflect upon and learn from the genocide of Europe’s Jewish population, and other groups such the Roma and LGBT community.

Sclera Pavilion
Conceived as a contribution to the 2008 London Design Festival, in collaboration with the American Hardwood Export Council, the Sclera pavilion was inspired by the human eye. An exploration of form and space, it was designed as a public room in the heart of the city that could be simultaneously calming and uplifting – an immersive urban monument about slowing down in order to see and understand the world better. Located in a small square within the Southbank Centre, and innovatively constructed of American tulipwood, the pavilion was open to the public at all times of the day and night.

National Cathedral of Ghana
Based in Accra, the National Cathedral of Ghana will be a unique 21st century landmark where religion, democracy and local tradition are seamlessly and symbolically intertwined. Situated within 14 acres of landscaped gardens, the proposed design will house a two-level 5000-seat auditorium which, with the addition of two podiums designed for standing, can accommodate a congregation of up to 15,000 people. The Cathedral’s main architectural concept draws on both contemporary Christian architectural principles and motifs from traditional Akan culture.

Mass Extinction Memorial Observatory
Located on the Isle of Portland in the English Channel, the Mass Extinction Memorial Observatory (MEMO) will be a monument dedicated to preserving the memory of extinct species. Designed as a continuous spiral walkway wrapped around a large central cavity, the structure’s centre will contain a 3-metre wide inverted bell, which will toll each time a species goes extinct. The internal walls of the building will be lined with illustrative carvings that act as memorials to the 860 species that have already become extinct since the dodo. The building will also act as an education centre and observation structure.

The Design Museum is grateful for the support of the American Hardwood Export Council and Hitachi Digital Media Group.

Can architecture be used to record our memories and shape perceptions of past events? Can it help us better understand today?

In this talk, celebrated architect Sir David Adjaye examines the idea of the monument and explores how architecture and form can be used as storytelling devices, in conversation with architect and curator Nikolaus Hirsch.

The pair will discuss the meaning of ‘monuments’ today through focusing on several buildings that feature in David Adjaye: Making Memories exhibition at the Design Museum.

3D - Adjaye Associates
Adjaye Associates is an award-winning architectural practice founded and led by Sir David Adjaye OBE. As Adjaye Associates has grown to a global practice, since its inception in London nearly 20 years ago, Sir David and his team have increasingly focused on projects with an enriching social agenda, culminating in the completion of the Smithsonian National Museum for African American History and Culture on the National Mall in Washington DC. The practice has offices in London, New York and Accra and completed work in Europe, North America, the Middle East, Asia, and Africa. From temporary installations to museums to galleries and university campuses, Adjaye Assocaites projects throughout the globe are unified by their ability to offer a rich civic experience and to reference a wide cultural discourse.

2D – A Practice for Everyday Life
A Practice for Everyday Life is a graphic design studio based in London. Their work includes art direction, identities, publications, exhibitions, type design, signage, packaging, and digital. They have built a reputation as an internationally renowned collaborator through their work with like-minded companies, galleries, institutions and individuals, and work with a conceptual rigour that ensures each design is meaningful and original.

About the Design Museum
The Design Museum is located in London and is the world’s leading design museum. It makes the impact of design visible and is the only place in the UK where the design industry, education and the public can come together to change the way people think about themselves and the future.

Since it opened its doors in 1989 the museum has displayed everything from an AK-47 to high heels designed by Christian Louboutin. It is a registered charity that has staged over 100 exhibitions, welcomed over six million visitors and showcased the work of some of the world’s most celebrated designers and architects including Paul Smith, Zaha Hadid, Jonathan Ive, Miuccia Prada, Frank Gehry, Eileen Gray and Dieter Rams.

On 24 November 2016, The Design Museum relocated to Kensington, west London. Leading architectural designer John Pawson converted the interior of a 1960s modernist building to create a new home for the Design Museum giving it three times more space in which to show a wider range of exhibitions and significantly extend its learning programme.