Cultured Meat: Just Around the Corner?

The idea of growing meat outside an animal has been around for a long time. In 1931, Winston Churchill wrote that by the 1980s “we shall escape the absurdity of growing a whole chicken in order to eat the breast or wing, by growing these parts separately under a suitable medium.” Although his timing was off by four decades, his predictions are beginning to materialise as the world looks for new ways to feed its burgeoning population whilst overcoming the environmental problems of conventional animal agriculture.

In 2013, Dr Mark Post of Maastricht University cooked and ate the first synthetic burger grown from cultured animal cells in front of a room full of journalists in London. Since then, the field of cultured meat, or “clean meat”, has grown rapidly as start-ups worldwide compete to be the first company to bring a cultured meat product to market, with companies such as Memphis Meats, JUST and Aleph Farms demonstrating prototype products. But when will the first products be ready? And will a lab grown steak be finding its way to our tables any time soon? The latest IDTechEx report, “Plant-based and cultured meat 2020-2030: technologies, markets and forecasts in novel meat replacements” by Dr Michael Dent, combines in-depth analysis of the science and technology within the field with industry understanding to explore the future of cultured meat, comparing it with plant-based meat, which has experienced a similar surge in publicity in recent years.

The science behind cultured meat is fairly well established, with the major challenges being around costs, scale up and regulation. A sample of cells is first taken from a live animal and put into a tank called a bioreactor. Inside the bioreactor, the cells are fed a nutrient-rich broth called growth medium that enables them to grow and divide, allowing trillions of cells to be produced from a small sample. Once enough cells have been produced, they are turned into developed muscle and fat cells through a process called differentiation and harvested. Standard food processing technologies are then used to form the final product – meat.

Unlike plant-based meat analogues such as those produced by Beyond Meat and Impossible Foods, cell culture has the potential to produce meat products identical to those produced through animal slaughter, but far more efficiently and at a fraction of the environmental cost. Mosa Meat, the start-up founded by Dr Mark Post, claims that a single cell sample can create up to 10,000 kg of cultured meat, with the cultured meat process requiring 99% less land and 96% less water than traditional livestock agriculture. Cultured cells double in number every few days, meaning that cultured meat could also be produced far quicker than conventional meat – Israeli start-up Aleph Farms claims that it can produce a batch of cultured steaks within three weeks, compared with the two years it takes to grow a cow.

Investors have responded optimistically, with cultured meat start-ups raising over $125 million since 2015 and investments growing by 85% between 2017 and 2018. High profile backers include Bill Gates, Richard Branson and Google co-founder Sergey Brin, who helped fund the first synthetic burger grown in 2013. 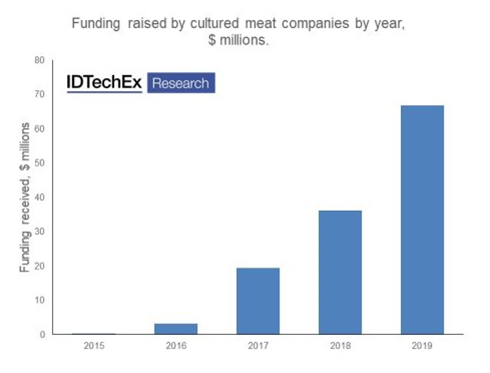 Despite this optimism, cultured meat still has a long way to go before it appears on our dinner tables. The first cultured burger famously cost $280,000 to produce and, whilst costs have come down considerably since then, the price of production remains a challenge. The dominant production cost is growth medium, the nutrient rich broth used to grow the cells, which can cost around $400 per litre, with conventional bioreactors requiring up to 600 litres of medium to produce 1 kg of meat. Cultured meat start-ups are investing heavily in R&D to reduce this cost, although it will likely remain a challenge for many years.

Another major challenge is that of scale up. Producing cultured meat at commercial scale will be extremely challenging – no company yet has a scaled-up facility or supply chains in place. Whilst most of the processes used in cultured meat production are well established at a lab bench scale, few have been performed at scale and the technologies necessary to produce affordable cultured meat at commercial scale, such as advanced bioreactors, simply do not exist. Because the industry is so new, there is no ecosystem around cultured meat either. No potential partner company is investing in the R&D required to produce bioreactors, growth medium or growth factors at the required scale. Cultured meat companies could theoretically do this all themselves, but this will be very expensive and risky.

The other major challenge facing the cultured meat industry is government regulation. No jurisdiction has yet approved cultured meat for consumption and regulatory approval could take years, especially in the USA, EU and China, which are likely to be the largest markets. Approval in any jurisdiction is likely to require detailed safety data. No company has yet revealed any data about large scale consumer safety tests – it’s unclear what, if any, tests have been done.

So when will the first products be ready? Despite the major challenges the industry is facing, some cultured meat start-ups remain optimistic. Josh Tetrick, CEO of JUST, has claimed that the company’s cultured chicken nuggets have been ready for small scale commercialisation since 2018, despite still costing around $50 per nugget, and could be released as early as late 2019, pending regulatory approval. Other companies are more conservative. Uma Valeti, CEO of Memphis Meats, has emphasised the importance of taking time to get the release right, rather than risking a PR disaster similar to the one experienced by producers of genetically-modified products – consumers are notoriously sceptical of biotechnology, especially within food. Regardless of companies’ intentions, it is unlikely that cultured meat will find its way onto supermarket aisles any time soon. Instead the first products will likely appear in selected restaurants in a limited release, reserved for the more adventurous and wealthy diners.

The science and technology behind cultured meat, as well as the challenges facing the industry, the likely future of cultured meat and more, are discussed in depth in the latest IDTechEx report, “Plant-based and cultured meat 2020-2030: technologies, markets and forecasts in novel meat replacements”by Dr Michael Dent, visit www.IDTechEx.com/AltMeat to find out more.

To find out more about Life Sciences research available from IDTechEx visit www.IDTechEx.com/LifeSci or to connect with others on this topic, IDTechEx Events is hosting: Healthcare Sensor Innovations 2020 Conference on 17 - 18 March 2020 in San Jose, USA. Please visit www.HealthcareSensorInnovations.com/USA

IDTechEx guides your strategic business decisions through its Research, Consultancy and Event products, helping you profit from emerging technologies. For more information on IDTechEx Research and Consultancy contact research@IDTechEx.com or visit www.IDTechEx.com.