Merry Feastmas: 3 festive diets compared, but which is better for your waistline?

Whilst the thought of a classic Christmas roast is enough to make even the grinchiest of us excited for the big festive celebrations; not all of us will be sharing the same Christmas meat-filled dinner diet.

According to a recent report by Waitrose, one in eight Brits are now vegetarian or vegan. Whilst 21% identify as ‘flexitarian’, eating a meat-free or meat-reduced diet.

With the rise of the plant-based diet and mindfulness eating trend sweeping the globe this year, it comes as no surprise that vegetarian and vegan Christmas dinners are becoming increasingly popular in the UK. Whilst turkey continues to take centre stage, 27% of hosts are set to cater for an alternative diet at their Christmas dinner table this year (Tesco’s Christmas report).

With an interest in all things Christmas and who doesn’t love talking about food, OnBuy.com decided to take a closer look at the nutritional value of your ‘traditional’ Christmas dinner and compare it to vegetarian and vegan friendly alternatives[i] to see just how many festive pounds you will pile on; making you feel a little less jolly.

The nutritional information for a traditional turkey dinner and the alternatives were calculated by collating the calories, fat, saturates, sugar and salt content of each component of a traditional dinner from four leading supermarkets: Tesco, Sainsburys, Waitrose and M&S[ii].

[i] The Wellington portions are vegetarian only, whilst the Nut Roast is both vegan and vegetarian. A selection of both Nut Roasts and Wellington alternatives that are stocked by each supermarket were used to calculate the average nutritional values per portion for each dinner. This average is calculated using the recommended portions each supermarket specified.

The staple elements to a classic Christmas roast were identified and those unsuitable for vegetarians and vegans were replaced with alternatives[i]. An average was calculated from all four supermarkets in order to give an indication to the nutritional values per item - a ‘main’, roast potatoes, stuffing, carrots, parsnips, Brussel sprouts, a Yorkshire pudding, cranberry sauce, gravy. And pigs in blankets were chosen for the classic dinner only.

OnBuy.com discovered that the average traditional Christmas dinner with all the trimmings equated to just over a staggering 1037kcal – more than half of men and women recommended daily allowance. Interestingly, the Wellington vegetarian alternative dinner trumped the traditional dinner with a staggering intake of 1080.29 calories (and that is without a substitute for pigs in blankets).

The Vegan Nut Roast dinner came out on top with the least calories (954.32) with a difference of 83.15kcal between that and the traditional Christmas dinner[ii]. When removing the infamous pigs in blankets from the traditional dinner, it contains just over 871kcal; meaning that three of the nation’s favourite bacon covered sausages, on average equates to 166.2 calories, as well as 12.15g of fat, of which 4.5g are saturates. Now that’s a hefty price to pay!

However, a Christmas feast without pigs in blankets would mean you were consuming less calories than both the veggie Wellington and vegan Nut Roast alternative dinners this winter season. In terms of fat content, the Wellington vegetarian dinner and all the trimmings on average contains the most with 38.62g, of which 13.5g is saturates.

The traditional dinner, surprisingly, comes second with 36.69g of fat, of which a whopping 12.56g is saturated fat. Thereafter, the Nut Roast dinner takes the crown, with the lowest fat content (31.54g of fat, whilst 4.55g are saturates)

When removing the trimmings and solely comparing the ‘main’ element of the festive meal, a portion of the Wellington continues to contain the most calories and fat; just shy of 410kcal and a substantial 22.98g of fat. A portion of the Nut Roast follows suit with 283.33 calories and 15.9 grams of fat (1.88g of which is saturates).

[i] All the Christmas dinner alternatives used vegan products for the stuffing, gravy and Yorkshire puddings, making these the only variables that changed between the four dinners, except the ‘main’.

[ii] In order to determine portion sizes for each Christmas dinner the BBC Good Food ‘Christmas portion planner’ was used. This cannot represent the portion sizes for every single Christmas dinner but does give an indication of the nutritional values per average recommended portion. The BBC Good Food ‘Christmas portion planner’ recommended between 140-175g of turkey per person. In order to gage an average, 155g of turkey was calculated. *The nutritional information for parsnips, gravy and vegan gravy was unavailable from M&S and therefore the values for these items have been calculated using the other three supermarkets only in order to produce an average. 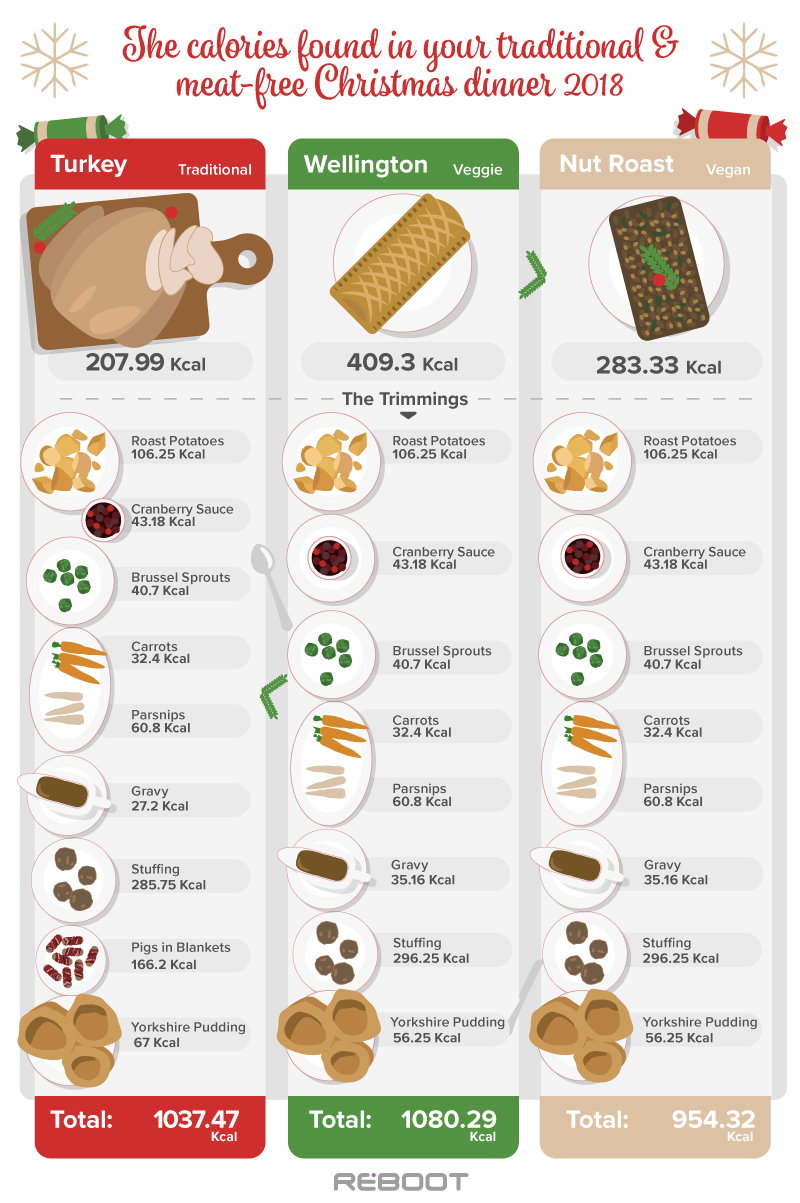