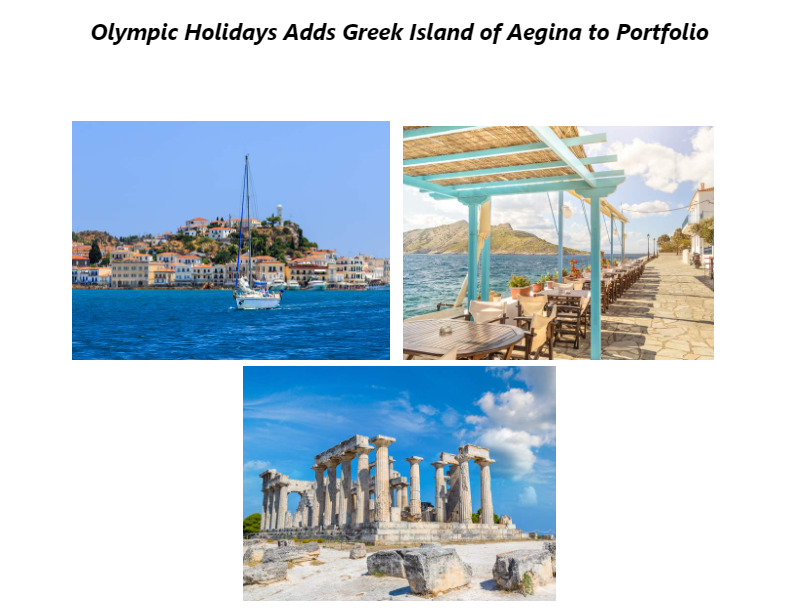 January 2021/…Olympic Holidays has added the charming Greek island of Aegina to its portfolio – an island favoured by the Athenians, just nine miles long by six miles wide and with 20 beaches, 2021 is the time to let the Aegina time machine take you back into the past – avoiding 2020 of course!

To a stunning temple older than the Parthenon in Athens. To an olive grove with gnarled trees still alive after 2,000 years. To the remains of a medieval village laid waste by a notorious pirate. And to faded neoclassical houses in a lively, colourful port that was briefly the capital of Greece.

That’s Aegina, once described as the most beautiful Greek island you haven’t heard of.  Time to change that!  It’s a great place for tourists to discover.  More than 20 beaches, gorgeous, warm blue sea, water sports, a water park, lively resorts, traditional villages, great food and friendly people are among the many attractions and at its heart is a towering volcanic mountain where it’s said a god once prayed for rain. The Mount Oros area is now protected as one of the most historic and beautiful landscapes in Greece.

Long ago, Aegina Town, the main port, was one of the wealthiest towns in Greece. Now it’s authentically Greek, bustling narrow lanes, small shops and tavernas, a harbour crowded with colourful boats, horse and carriage rides along the waterfront and a single column from an ancient temple to Apollo, god of many things including music and healing. Small beaches are tucked away along the north coast until you get to Souvala, a fishing village that has developed into a lovely, laid-back holiday resort. Busy, stylish Agia Marina, on the east coast, has Aegina’s longest sandy beach, with sunshades, sunbeds, water sports and cafes.

Not far away is a well-preserved temple to the goddess Aphaia, built more than 2,500 years ago. Its 28 marble columns still gleam in the sun – an impressive spectacle.  The picturesque west coast road hugs the coastline on the side of the island that enjoys the most spectacular sunsets. The road sweeps past several golden sand beaches, including two at Marathonas and the curved bay of Aiginitissa which is fringed with huge eucalyptus trees. Then on to the traditional fishing village of Perdika that is well known for its fish restaurants.

So much to see and do on an island you may not have heard of – until now.

How to Get there…Fly direct to Athens (3hrs 30) then take a short 40min ferry crossing to Aegina.

When to go…On 16th & 17th July, the resort of Agia Marina celebrates its saint day with a procession, food, drink, music and fireworks. The church is on the beach and the festival is enjoyed by locals and visitors alike. The island also hosts an international classical music festival in August and every summer it hosts a popular three-day volleyball tournament that attracts some of the country’s to players!

How to get around…Just six miles wide but plenty to see! Hire a car and enjoy access to secluded beaches, vineyards and orchards and take the narrow twisting roads into the volcanic mountains in the rugged South-East.

Why Olympic…Olympic Holidays offers the best low deposit option in travel – from just £89pp to secure a booking. Nothing to pay until 12 weeks prior to travel and you can fly from over 25 UK airports with a variety of airlines including British Airways.

The Danae Hotel is situated on the coastal road of Aegina, close to the temple of Apollo approximately 1 km from the town centre. It has 54 rooms and one suite, most with a sea view or with a pool view. Its charming atmosphere is definitely going to capture you from the first moment.

Olympic Holidays (www.olympicholidays.com) offers 7 nights at the Danae Hotel from £650pp staying in a Double Room on a B&B basis including flights from Luton. Travelling June 2021.

The beachfront LaLiBay Resort welcomed its first guests during the summer of 2020 after a substantial renovation with décor echoing a nautical theme, boasting 18 acres of densely planted gardens, private beach area and Pigi Spa wellness and longevity centre.

Located in Aghia Marina with the closest beach and shops just 300 metres away. This is a modern apartment hotel and it is characterised by its picturesque architecture and beautiful garden. It provides a wide range of amenities for the comfort and well-being of its guests.

Olympic Holidays (www.olympicholidays.com) offers 7 nights at the Esperides Maisonettes from £640pp staying in a 1 bed apartment on a self-catering basis including flights from Luton. Travelling June 2021.